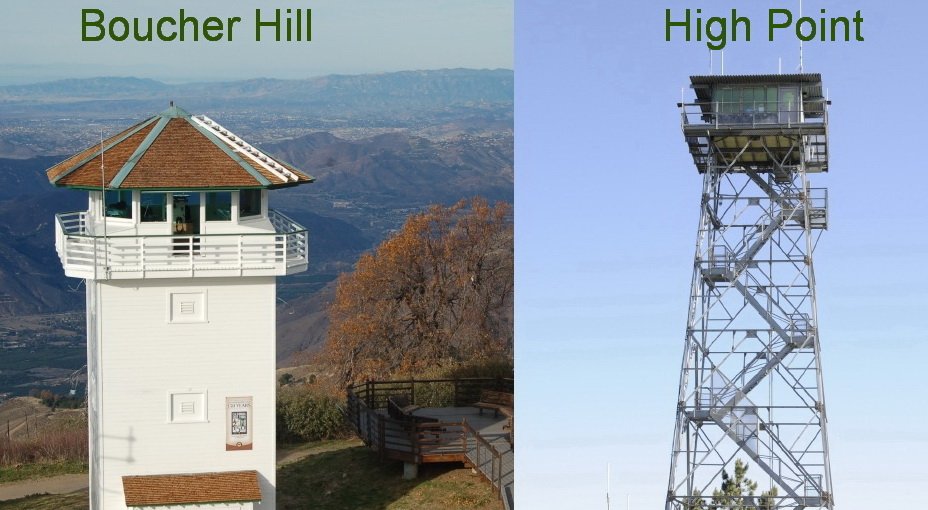 The San Diego-Riverside Chapter (FFLA-SDRC) was organized in 2008 as a nonprofit volunteer organization dedicated to restoring, maintaining and staffing historic fire lookouts in San Diego and Riverside Counties in Southern California.
The FFLA-SDRC began staffing the High Point tower with volunteers for fixed-point fire detection in 2009 and Boucher Hill in 2012. Both achieved a goal of 100% staffing during the 2014 fire season. FFLA-SDRC has achieved that same 100% fire season staffing for every year since with few exceptions due to weather or similar personal considerations.

High Point Lookout Tower, located on the highest point on Palomar Mountain, located within the Cleveland National Forest, has been restored and returned to active service. It provides visual fire detection from the Northeast portion of San Diego County, to the deserts, across Riverside county, up into the San Bernardino and San Jacinto mountains and continuing all the way to the coast

The California – South Region was formed in 2018 to assist chapters, such as the San Diego Riverside County Chapter (SDRC) or other organization with similar ambitions in bringing the nationals goals to fruition.

our other restored facility lies within Palomar Mountain State Park. It is located on a panoramic point in the Park’s southwestern region and is a California Registered historical lookout. In addition to their fire detection duties, our volunteer lookouts also support Park Rangers as another pair of “eyes and ears”.

The Boucher Tower Parking lot is open for vehicular traffic and the tower is open for public tours whenever one of our FFLA-SDRC volunteers, who are trained as docents of Palomar Mountain State Park, are on duty and isn’t occupied with their major responsibility of fire detection. Come up on a clear day for a magnificent panorama from Mexico, over Downtown, out to Point Loma, past Camp Pendleton all the way to Santa Catalina Island.

FFLA-SDRC works closely with the United States Forest Service’s Cleveland National Forest which manages extensive land holdings in San Diego and Riverside counties. They work closely with the California Department of Forestry and Fire Protection (Cal Fire) and many Native American and rural fire departments to provide fire protection to these areas.

National Forest Fire Lookout Association  (FFLA), founded in 1990, is an all volunteer organization involved in research of former forest fire lookout sites, ground cabins and early forest fire detection methods. Anecdotes of lookout operators both past and present are documented.The organization encourages efforts of public groups and others in the restoration of historic forest fire lookouts.

The FFLA-SDRC would like to recognize the somewhat unusual collaboration between a research project at the University of California San Diego and first responder agencies over the past approximately 20 years. Starting in 2000, the UCSD High Performance Wireless Research and Education Network (HPWREN) informally collaborated with wireless communications staff of firefighting and County agencies, specifically via the Emergency Command Center of the California Department of Forestry and Fire Protection, as well as the San Diego County Sheriff Department’s Regional Communications System. As the collaboration progressed over time, in 2010 the County of San Diego contributed funding for additional cameras and other sensors to augment what HPWREN already had in place. Around that time HPWREN had a significant number of fire stations connected, which then led to San Diego Gas and Electric (SDG&E) supporting a substantial buildout of connectivity, cameras, and weather sensors for the San Diego County area, to encompass as many local, state, and federal fire stations as possible. The continuation of this buildout is by now directly supported via San Diego County, SDG&E, and fire agencies.

SDRC has used HPWREN facilities since reopening both the Boucher Hill and High Point lookouts. The first several years saw very spotty to no cell coverage and HPWREN provided their network for VOIP (Voice Over Internet Protocol) which provided reliable telephone support in the tower. Currently with full HPWREN internet facilities in both towers lookout are able to access many pieces of critical information, including high resolution video from the extensive HPWREN network, as well as any other internet website. Thank You for your support.